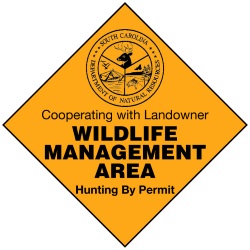 South Carolina is divided into four game zones. The SCDNR sets and regulates the methods of harvest, bag limits and other requirements for hunting on Wildlife Management Areas (WMA) statewide.

Two types of property are included in the Wildlife Management Area Program: “specific” named WMAs and “other” unnamed WMAs. Other WMA lands occur as scattered tracts, often leased from private landowners and the forest industry. The hunting seasons for these unnamed properties are set by Game Zone with all the “other” WMA tracts within a particular Game Zone having the same seasons. These “other” WMA lands are shown as unlabeled green tracts on the WMA maps.

“Specific” WMAs are generally larger tracts of land, many owned and managed by SCDNR and have special seasons. These “named” WMAs are shown as labeled dark green tracts on the WMA maps. The hunting seasons for named WMAs are listed within each Game Zone.

The WMA Game Zone map listed above is in the Adobe PDF file format. Adobe® Reader® is required to open the files and is available as a free download from the Adobe® Web site.