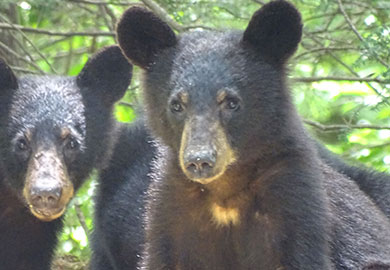 Black bears can learn to co-exist with people, but people need to learn some common-sense rules about co-existing with bears, such as removing bird feeders when bears are visiting. (Photo by John Hains)"

Biologists with the S.C Department of Natural Resources (SCDNR) are reporting increased black bear activity throughout the state, and they urge people who live in these areas of bear activity to go ahead and remove their birdfeeders.

Black bear breeding season has bears on the move, and bears are hungry and looking for an easy meal. Bird feeders in people's yards are among the favorite targets of black bears.

"If a bear has been reported in your area, go ahead and take your feeder down and leave it down," said Tammy Waldrop, SCDNR black bear biologist stationed in Clemson. "Don't wait until the bear has knocked your feeder down to remove it. If the feeder is taken down and left down, the bear will move on." For more information on dealing with black bears, visit: https://bearwise.org and learn the Six BearWise At Home Basics.

Dealing with bears is a neighborhood problem, Waldrop said, and neighbors need to work together. If a neighborhood hears of a bear in the area, everyone should take their feeders down, and leave them down. If only a few people take down the feeders and the rest of the neighbors do not, it does not solve the problem.

The mere presence of a black bear does not necessarily represent a problem. Most bears are just passing through, but if there is an easy meal to be found, they will take advantage of it. The key to dealing with wandering bears is not giving them a reason to hang around. Removing any food source that would attract bears will greatly reduce any bear issues in residential areas.

SCDNR offers these common-sense suggestions to better cope with bears:

.While people may be excited about seeing a bear, biologists urge them to remember that bears are wild animals and should be respected. Black bears are usually shy, evasive and non-aggressive toward people. People and black bears can live in the same area with little conflict by following basic rules.