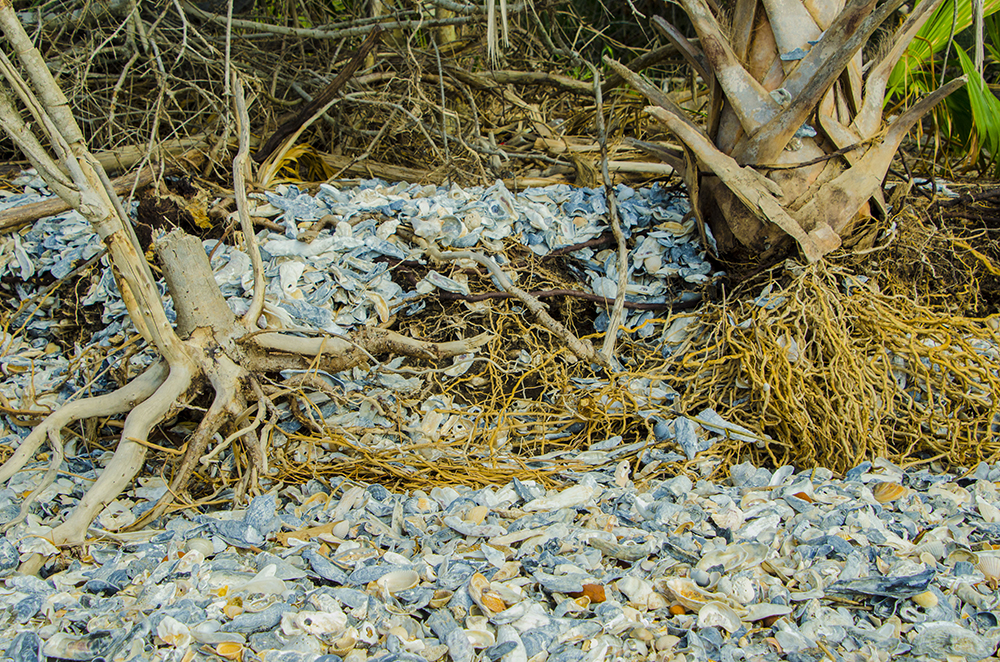 Oyster shell from an ancient shell ring complex litters the beach at low tide on SCDNR's Botany Bay Heritage Preserve & WMA in 2017. Since then, archaeologists with the agency's Heritage Trust program have waged a war again the clock to excavate the site and catalog thousands of artifacts before it is lost to sea level rise. [SCDNR photo by D. Lucas]

Could oyster shells left behind in rings and mounds along the Southern-Atlantic coast provide clues about the methods used by coastal-dwelling American Indian tribes to manage shellfish harvests? That’s one of the central questions examined in "Ecosystem stability and native American oyster harvesting along the Atlantic Coast of the United States," a research paper published recently in the respected research journal Science Advances, and the answers could give resource managers at agencies like the S.C. Department of natural Resources (SCDNR) new insights into modern-day oyster reef restoration efforts. SCDNR Heritage Trust program archaeologist Dr. Karen Smith is one of the paper’s co-authors.

As it turns out, you can learn an awful lot about the condition over time of a natural resource such as an oyster reef by studying clues from past, if you know where to look for them.

"The data set used in the article includes our work from Pockoy Island [A small barrier island that is a part of the SCDNR's Botany Bay Plantation Heritage Preserve & WMA]," said Smith. "So all the oysters that we’ve measured so far at that shell ring are included in the study, as well as others excavated from the 'Spanish Mount' shell mound at Edisto Beach State Park, which is nearby."

Another important contribution to the study was mapping data for 19th Century and early 20th Century shell reef locations. That historic data based on maps of the known locations of oyster reefs along the coast during the heyday of the oyster canning industry was put into GIS by The Nature Conservancy of South Carolina, and brought to Smith's attention by a biologist at the SCDNR's Marine Resources Research Institute. "That really speaks to the interdisciplinary and interagency collaborations that are so important to advancing this research," added Smith.

"These are live oyster beds that were harvested as we move through the industrial age, when the harvesting of oysters in South Carolina began to be done on a much larger scale," said Smith.

The Heritage Trust archaeologist plays a key role in managing the SCDR program's growing effort to carefully record and catalog artifacts excavated from state Heritage Trust properties using digital databases. The fact that the SCDNR had an existing large set of data mapping the size of oyster shells from a "Late-Archaic" period shell ring site made it a perfect fit for the study led by Dr. Victor Thompson with the University of Georgia's (UGA) Department of Anthropology.

"The basic question is: Does the size of oysters change over time? If we look at this long period of human exploitation of oysters on the coast, do we see an impact to the beds over time?" explained Smith. "One thought with the Late-Archaic people is that because they're harvesting oysters in what look like pretty massive quantities and building these major monumental shellworks, should we see an impact on the oyster beds as a result of that?"

There's still a lot of questions about that, but what archaeologists are fairly certain about is that -- aside from an outlier like Spanish Mount, where numbers of extra-large shells have been found -- there aren't really noticeable changes in the average size of the oysters that can be attributed to human exploitation of the beds, until we get to the period of modern harvesting techniques associated with the canning industry in the early 1900s. "It's only then that we see substantial negative impact on oyster beds and on oyster size," said Smith.

Large data sets based on measurements of oyster shells excavated from the shell ring discovered in 2017 at Pockoy Island provide a window into our coastline's biological, as well as its cultural, past, and were used, along with similar data from sites in coastal Georgia and South Carolina as the basis for the research outlined in the Science Advances paper. The study relied on the analysis of approximately 38,000 oyster shells excavated from these sites suggests that harvesting practices used by Native American peoples may have helped sustain coastal oyster reefs over thousands of years, despite shifting human population sizes and local densities and changes in sea level. According to a summary of the article prepared by staff with the Science Advances journal, the paper's co-authors theorize that territoriality and established systems of fishing rights may have limited access to oyster reefs to prevent overharvesting, and kept the reefs stable over thousands of years.

From the article summary: "To explore how the structure of oyster reef ecosystems changed with human use before the collapse of oyster fisheries in the early 1900s, Thompson et al. used datasets with oyster size measurements (which provide insights about reef health) from 15 archaeological sites and looked at the distribution of oyster beds mapped in the late 1800s. Oysters did appear to decrease in size at some sites from 4500 to 3500 years ago, suggesting early human harvesting practices stressed oyster populations. But, overall, the oysters grew larger over time, pointing to productive ecosystems despite human exploitation."

These findings could support modern conservation practices designed to prevent overharvesting and help identify places along the coast where oyster fisheries have historically proven resilient. It's another facet of the wide-ranging ways that the SCDNR's Heritage Trust Archaeology program supports the agency's larger mission of protecting the Palmetto State's natural resources for future generations.

Science Advances (and the family of related Science journals) is published by the nonprofit American Association for the Advancement of Science (AAAS). AAAS is the world's largest multidisciplinary scientific society and a leading publisher of cutting-edge research through its Science family of journals. To read the complete article on the Science Advances website, please visit ScienceMag.org.

Since 1974, SCDNR's Heritage Trust program has preserved and protected natural and cultural properties across South Carolina. Take the opportunity to explore the diverse preserves managed through the program, learn more about current research and discover how you can get involved by visiting the program’s web pages at HeritageTrust.DNR.SC.gov. A three-minute movie about the research efforts underpinning the Science Advances paper can also be viewed online.