South Carolina's 2019 seabird nesting season has come to an end, and counts from nesting colonies have been compiled for this season by SCDNR biologists.

INine species of seabirds, including brown pelicans, royal terns, Sandwich terns and black skimmers, regularly nest in South Carolina in large colonies of hundreds to thousands of pairs. Each spring and summer, staff biologists survey islands to determine number of nesting birds of each species. Biologists fly over SCDNR seabird sanctuaries to photograph nesting areas and count seabird nests from compiled photos. This season, biologists were also able to utilize aerial images from a UAV (drone) at several properties. 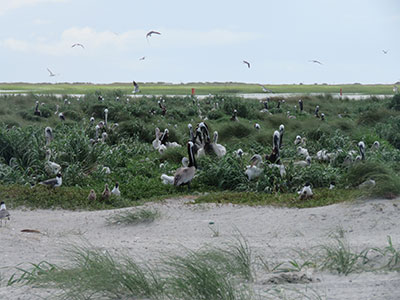 The nesting pelican colony on Deveaux Bank Seabird Sanctuary was the second largest in the Palmetto State in 2019. [SCDNR photo]

SCDNR biologists counted 6,109 brown pelican; 12,983 royal tern; 3,562 Sandwich tern; and 1,049 black skimmer nests. Bird Key Stono Seabird Sanctuary had the most pelican nests again this year with 2,270 nests counted, followed by Deveaux Bank with 1,701 nests. For the past several years, Crab Bank Seabird Sanctuary in Charleston Harbor has had no birds nesting on it due to erosion from storms and hurricanes. Efforts are underway to renourish the island with material from deepening the harbor channel. Information about the project can be found at https://www.sccoastalbirds.org/

"Although numbers were up slightly this year, predation, overwash and disturbance affected productivity of several species," said SCDNR Wildlife Biologist Janet Thibault. The Cape Romain Wildlife Refuge was the only site where black skimmers were successfully able to raise chicks to fledging age.

Due to the sensitive nature of the colonies, portions of Deveaux Bank and all of Bird Key Stono and Tomkins islands are closed to the public from March 15 through October 15 to protect breeding bird nests and their young. Dogs and camping are prohibited year round on these SCDNR-managed islands.

All of these colonial seabirds are listed as species of Highest Priority Conservation Status under the South Carolina Comprehensive Wildlife Conservation Strategy. More information about coastal birds and the work SCDNR does for these species can be found on the SCDNR website at: http://www.dnr.sc.gov/wildlife/species/coastalbirds/index.html