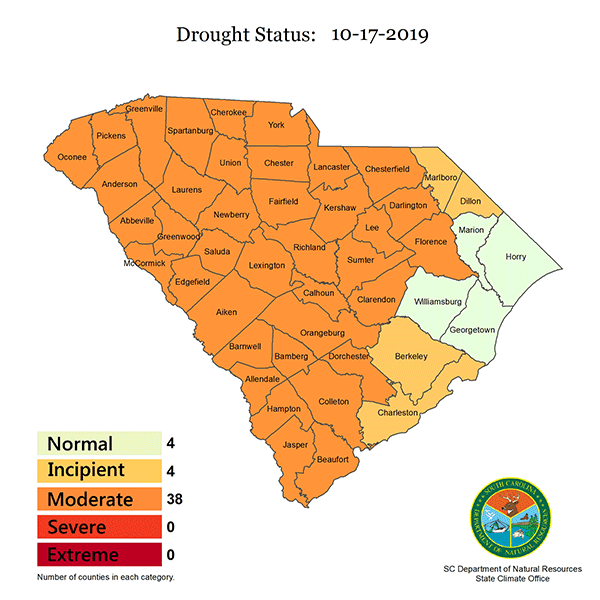 Map of South Carolina showing the drought status of every county.

The South Carolina Drought Response Committee, which is comprised of representatives from multiple state and local agencies, met via conference call Thursday to review the drought status for all counties

The state is separated into four Drought Management Areas (DMA) which follow the state’s river basins.  After reviewing the drought indices and the drought’s impact on all sectors the Committee for each DMA votes on the level of drought (Incipient, Moderate, Severe, Extreme). The committee faced a challenge as it tried to agree on a declaration for each county that takes into consideration multiple factors, including agriculture, forest fire risk, water supply, and water quality.

The Committee upgraded the drought from incipient to moderate drought for Beaufort, Chesterfield, Darlington, Dorchester, Florence, Oconee and Pickens counties.

Williamsburg, Georgetown, Marion and Horry counties were maintained at no drought.

There was overwhelming evidence that it is a severe agricultural drought for many counties. The Committee specifically heard from beef producers, forced to feed their winter hay in late summer, and there is a finite supply. It has also been a risk for them to plant any winter grazing because of the limited soil moisture. The drought has also decreased yield in row crops in the affected counties.

However, after hearing from all sectors, and with the potential for heavy rainfall this weekend, the Committee decided to postpone moving to Severe Drought in any county and will reevaluate in two weeks.

Reg Williams of Edgefield, co-owner of Log Creek Timber, Inc. and farmer in the Edgefield area, serves as the Agricultural Representative for the West Drought Management Area.

Williams voiced his concerns of staying in moderate drought status due to the dire agricultural impacts in the West Drought Management Area.

“From an agricultural perspective, we are in a severe drought, however I voted to stay at moderate drought status since we have yet to reach the severe drought status in all sectors,” said Williams. “Another reason for my decision is that due to the pending rainfall forecast the committee is going to reconvene in two weeks and reevaluate.”  Yvonne Kling, an agricultural producer in Aiken and Chair of the Aiken Soil and Water Conservation District, serves as the Soil and Water Conservation District Representative for the West Drought Management Area.

“I empathize with our farmers and recognize that any rain we may receive out of this coming weather event will not alleviate the current problems as winter hay has been fed to livestock and crops have already been lost and cannot be recovered,” said Kling. “We are in a farming crisis due to drought.”

The Forestry Commission reported that just in October, it has responded to 127 wildfires that burned more than 780 acres. This is more than twice the number of wildfires for the month of October and about five times more acres burned, compared to five-year average numbers.

According to Fire Staff Officer Leslie Woodham, the rains over the last week have helped improve conditions somewhat, and in the short term, wildfire danger has moderated.

“If we get additional rain over the next week or so, fuel moisture will increase, and wildfire potential will go down,” said Woodham. “With the rainfall we have received, the Forestry Commission is comfortable keeping most counties classified in Moderate Drought, but if we experience another dry period, the straw, grass, and other fuels that allow wildfires to start will be dry again, and the drought status will need to be re-evaluated.

The persistent below normal rainfall conditions have caused a steady drop in streamflow, groundwater and lake levels.

Since the last call, the U.S. Army Corps of Engineers declared a level one drought based on their drought plan in the Savannah Basin.

According to Priyanka More, SCDNR hydrologist, several groundwater gages in the Upstate dropped to below normal levels for the first time since the drought began.

Even through public water supply systems are reporting unprecedented water demands for this time of the year, there are currently no issues withdrawing water from the lakes and rivers, according to Robert Devlin, Director at SCDHEC Water Monitoring, Assessment and Protection Division. He added the water systems will continue to monitor the water levels and flows in the lakes and rivers used for water supply.

The committee will closely monitor the drought and reconvene in two weeks.