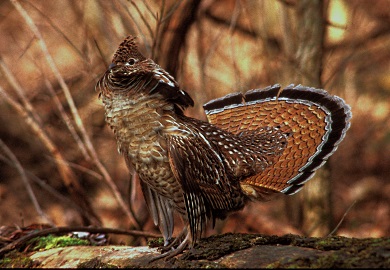 To get a better understanding of where ruffed grouse are found in South Carolina, SCDNR is asking outdoor enthusiasts to download a free app that will let them document grouse that they see or hear. (Male grouse photo courtesy of Ruffed Grouse Society)

Outdoor enthusiasts can download a free app (Survey123) for their smartphone that will help them document sightings of ruffed grouse in the Palmetto State for the South Carolina Department of Natural Resources (SCDNR).

Ruffed grouse is a chicken-like bird that is found in the mountains of South Carolina. While they are the most widely distributed upland game bird in North America, their populations have been in slow decline throughout the Appalachian region for the past 45 years.

To get a better understanding of where ruffed grouse are still found in South Carolina, SCDNR is asking outdoor enthusiasts to download a free app that will let them document grouse that they see or hear. The app will record the GPS location of where the grouse was seen or heard, and ask the user for information such as date and time, observation type (seen or heard), distance away and number of grouse.

SCDNR conducted a ruffed grouse survey in 2018, marking the first extensive survey for the birds in nearly a decade. Preliminary results from the survey confirmed what scientists have long suspected: South Carolina does not have an abundance of ruffed grouse, and detecting grouse is difficult.

“We are at the very Southern tip of the ruffed grouse’s range,” Small said, “and we don’t have nearly the mountain habitat that North Carolina and Georgia have.” There is little to no hunting pressure on ruffed grouse in South Carolina, according to Small, because there is little chance of success. Most Palmetto State grouse hunters go out of state to hunt.

Preliminary results had one grouse heard drumming and one grouse seen along a route. However, grouse were seen in the vicinity of routes anecdotally, with sightings made by biologists and turkey hunters.

Small said the takeaway from the 2018 survey is that grouse occur in the South Carolina mountains where habitat is appropriate but occur in low numbers and are difficult to detect. Small hopes that the smartphone app will give biologists a better idea about where ruffed grouse occur in the state, giving SCDNR a better chance to further study the birds.