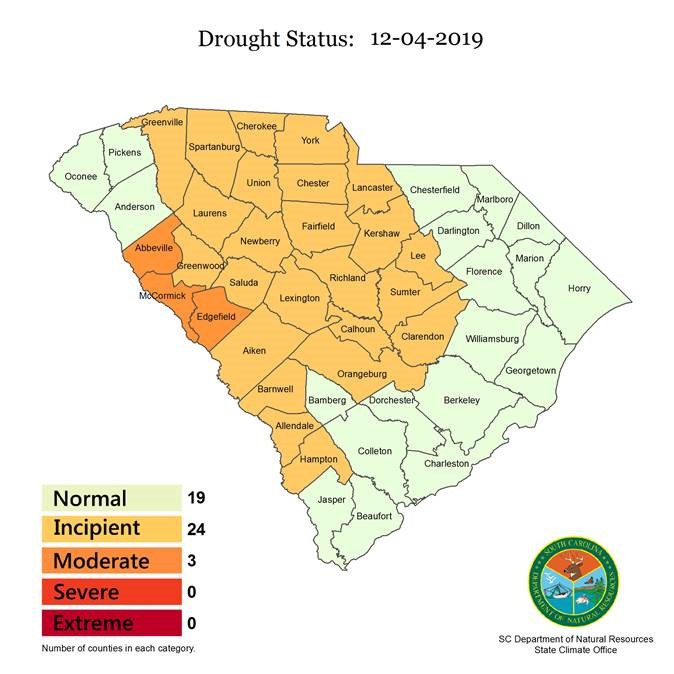 The South Carolina Drought Response Committee, after meeting today via conference call, determined that drought conditions have improved statewide, resulting in the drought designation for 38 counties being lowered or removed.

According to State Climatologist Hope Mizzell, most of the state has received normal to above normal rainfall over the last 60 days (see 60-day rainfall chart below). "Even though October and November are climatologically the driest months," said Mizzell, "normal-to-above-normal rainfall totals, and cooler fall temperatures, have been sufficient to lower the threat for wildfires, improve soil moisture conditions, and increase streamflow, lake levels and groundwater."

S.C. Department of Agriculture Marketing Specialist Katherine Helms advised the Committee that agriculture is in a better state currently with drought than in previous months. The cotton harvest in SC is coming to a close, and the soybean harvest is underway. Winter wheat is being planted, and some fields have already started sprouted due to recent rainfall and improved soil moisture conditions. Livestock producers with grazing livestock have been able to plant grazing forages, but will not see any major improvements throughout the winter until warmer weather this spring. These producers are continuing to feed hay as they are still seeing the devastation of previous months of drought in their pastures.

Improvements in streamflow conditions, along with stable groundwater levels across most of the state, supported a downgrade in the drought status for most counties. However, streamflow levels remain well below normal for Abbeville, McCormick, and Edgefield counties, and these below normal conditions supported maintaining the moderate drought status for these counties.

Chief Darryl Jones with the S.C. Forestry Commission's Forest Protection program, provided encouraging news that the wildfire situation has changed dramatically since the Committee’s meeting at the end of October.

During November, "wildfire activity was less than half of what the state normally experiences, compared to the 5-year average," said Jones. Recent frosts have started the normal curing of grasses and fuels that occurs in the fall, and Forestry Commission doesn’t expect any major wildfire danger in the short term. While some areas are still dry, fire danger should be low to moderate until January when fire activity normally rises.

The Committee will reconvene in mid-to-late January, and if winter rainfall totals continue to be in the normal range, the hope is that most counties will be drought free at that time.

The table below provides selected rainfall totals for the past 60-days ending December 1, 2019. 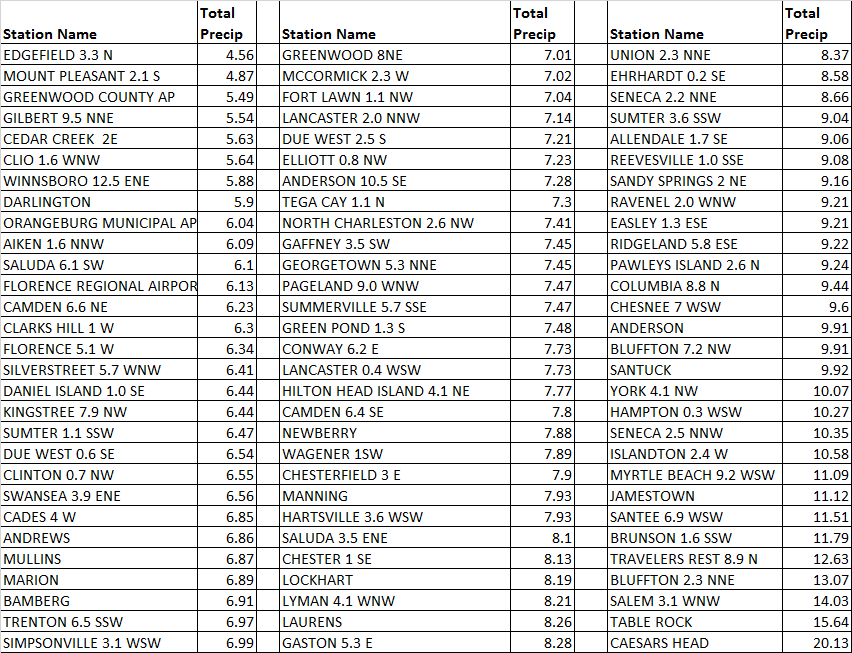