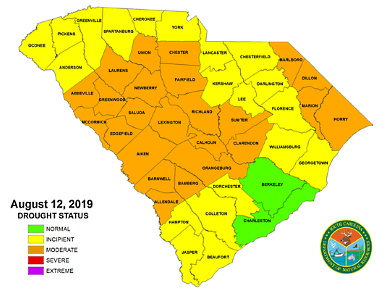 The South Carolina Drought Response Committee, meeting via conference call on Aug. 12, upgraded the drought status for 33 counties in the state.

Charleston and Dorchester were the only counties that did not enter drought status, according to the Committee.

Continued below normal rainfall combined with summer heat has continued to escalate the drought conditions for most counties. While multiple indicators supported the drought status upgrade, the drought’s impacts on crops and pastures were a driving factor, according to Hope Mizzell, S.C. State Climatologist.

Dr. John Irwin, a beef cattle producer, reported that some upstate cattle producers are liquidating cattle herds because of incredibly dry pastures, and others are feeding their spring harvested hay to survive.

SCDNR hydrologists provided an update that while abundant winter recharge has caused groundwater levels to remain at or above normal for much of the state, and lake levels remain near their target levels; streamflow levels have steadily declined over the past month. These declines helped support an upgrade in drought status for most of the counties in the state.

The committee will continue to monitor the weather and will meet again in three weeks.

More information about drought conditions and drought policy in South Carolina is available at www.scdrought.com.